The entire experience of modern sailing differs from “traditional” sailing in many ways. Modern boat designs, entirely new classes of equipment, overcrowded cruising grounds and limited access to ones’ boat have driven the need for new techniques and in some cases rendered certain well established aspects of seamanship completely obsolete. A case in point is the modern marina. It is simply impossible for a heavyweight “traditional” sailboat with a full keel, barn door rudder and no auxiliary power to safely navigate under sail into or out of a typical labyrinthine marina where as many boats as possible are crammed into narrow causeways which are laid out in every possible direction including directly into the wind. Some old salt might argue that he is a “real sailor” and can do it but the simple fact is that endangering all of the boats along his path is neither prudent nor safe and attempting the feat would merely prove that the sailor’s ego and not good seamanship is what defines his actions. The reality is that auxiliary engines are now a fact of life and if your boat resides in a marina you pretty much need to have one for the safety of your boat and every other boat there. 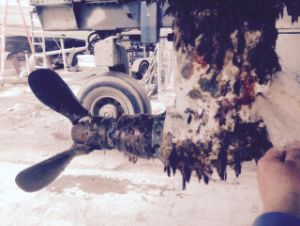 Plastic bags in the raw water intake will overheat your engine quickly as proven here. This is very common in the bay and delta.
The flip side to auxiliary engines is that far too many modern “sailors” have become completely reliant on them. If you consider your engine to be your primary form of propulsion then it would be wise to go out on the water and practice sail handling skills – including docking and leaving the dock under sail- until you feel competent enough to handle any situation that might arise using just your sails. You don’t necessarily need to be able to sail into your slip but you should be able to safely dock on an end tie, pump out or fuel dock in an emergency situation utilizing just your sails. Why? Because engines sometimes quit right when you need them the most.

Sixty years ago most sailboats didn’t have engines. Today nearly every sailboat has an engine and most of those boats should be classified as “motor sailors” rather than sailboats based on how they are operated. As such it becomes the responsibility of the Captain to know enough about the engine to operate it correctly, be able to quickly identify any anomalies while it is running and efficiently troubleshoot any problems that might arise. Without getting into a treatise about engine operation and maintenance, there are a few generalizations that apply to most engines.

Every engine needs fuel, air and an ignition source to run. For gasoline engines the ignition source is a spark from a spark plug and the associated electrical system, in the case of a diesel engine the ignition source is high pressure. In either case the fuel air mixture is injected into the cylinder and is ignited. As the fuel burns it creates high pressure that pushes the piston down and creates mechanical power that is transferred from the piston rod to the crankshaft and ultimately to the propeller. Once the fuel is burned the exhaust gasses exit the cylinder through an exhaust valve and make their way through the exhaust manifold, into a water lift muffler and then out the exhaust pipe. The process of burning the fuel and the friction between moving mechanical parts results in heat buildup in the engine block so a cooling system is used to draw the heat away. In a raw water cooling system outside water is drawn from the raw water intake, circulated through the engine block with a pump and dumped directly into the exhaust system which dumps it overboard through the exhaust pipe. In a fresh water cooling system the engine water continuously circulates through the engine and a heat exchanger where it gives up its heat to the raw water on the opposite side that is being drawn in with a second pump and dumped into the exhaust stream. Lubrication (oil) is essential to keep the engine from seizing up. Although this model is obviously oversimplified it is accurate enough to diagnose 90% of the typical problems that arise with most engines.

In the last year there have been two members of the San Jose Sailing Club who have unexpectedly lost their engines while out on the water. In both of these cases the first sign of a problem was a high temperature indication. Based on the simple model above the most probable cause of high temperatures is either lack of lubrication or lack of cooling. A quick glance at the exhaust outlet will determine if there is adequate cooling water circulating through the system since the spent cooling water gets dumped into the exhaust system and comes out of the exhaust pipe. Whenever abnormally high engine temperature is detected always shut the engine off immediately otherwise you risk seizing the engine and generating a very expensive repair bill.

In the first case of engine failure there was plenty of time and sea room to diagnose the problem and probably plenty of time to repair the problem if it had been discovered. Since the nature of the problem was not discerned, however, the Captain decided to abort his trip and tow his boat back to his slip- a logical and prudent decision in his case. In the second situation the engine quit while entering a tight breakwater into a marina and time and sea room were non-existent. This Captain decided that the risk to his engine seizing was less significant than the risk to his boat, his passengers and the other boats nearby so he chose to throttle the engine back to an idle and limp into his slip since he was nearly there already – a calculated decision based on the situation. Without attempting to critique the decisions made by either of these skippers, their experiences should serve to inspire you to think about what you would have done in their place. Could you have diagnosed the problem and fixed it? What would YOU have done?

It turns out that the cause of both engine failures was the same – foreign matter ingested into the raw water intake which blocked the cooling water supply thereby overheating the engine. This is actually a very common here in the bay with all of the plastic pollution, kelp from the ocean and weeds and water hyacinth coming from the delta. Through hull strainers seem to have little to no effect and most of the time the debris will end up in the engine raw water strainer and clog the entire raw water intake. The following list suggests some options that may or may not work to solve this problem depending on the specific situation:

· Ensure that a quickly deployable anchor is available to buy time while the problem can be safely diagnosed and resolved.

· Become comfortable enough to rely on your sails at a moment’s notice. This will allow the option of gaining time and sea room, waiting for better conditions or docking in a safe area.

· Access the top of the raw water intake from inside the boat and use a stick to clear the obstruction.

· Clear the debris by accessing it through the engine raw water strainer. An electrical fish tape or small plumbing snake works wonders. Before attempting this fix ensure that your bilge pumps are fully operational.

· Go swimming and clear the debris from the outside. Clean the bottom of spare cats while you are down there. It will make your boat faster and handle better and the cats will appreciate it.

· Ensure that your Vessel Assist membership is up to date and that you have a method to contact them for a tow.

· If things are bad and you are very close to your slip you can turn off the fuel to your engine, put the transmission in gear and use the starter motor to slowly move and coast and move and coast to your destination. WARNING: this is hard on your batteries, your starter motor and your wiring but it does work in a pinch over short distances. Just remember short bursts and long coasts with plenty of cool off time. This is not a race.

· Take a class on engines or hire a mechanic or friend to tutor you if the operation of your engine is in any way a mystery to you.

· Know how to rig your dinghy and outboard to safely move your boat.

· Come up with options of your own…

If you find yourself out on the water and your engine suddenly stops remember these two important points: first, don’t panic. Second, it is called a SAILBOAT for a reason. Most engine failures have a simple cause and a fairly simple solution. Think things through, assess your available options and make a plan to deal with the problem. By thinking about your options before things go wrong you will be in a much better position to quickly and calmly deal with those problems if or when they do arise.
Fair winds and safe passages!

Get together in the cockpit at a cruise